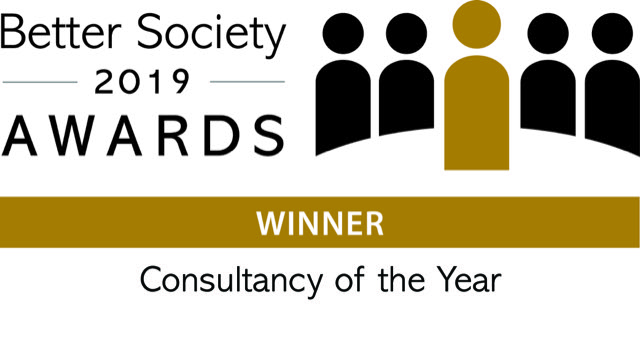 We are delighted win the Better Society Awards ‘Consultancy of the Year’ award last month.

Now in their fifth year, the awards celebrate companies and social enterprises which help create a better and more equal world for all.

Whether supporting young migrants against unfair immigration fees or helping fight for faster treatment for cancer patients, we are proud the prestigious panel of judges recognised our success working with a range of charities on a variety of campaigns and policy issues.

·       In England, nurtureuk’s key intervention was highlighted in the Department for Education’s mental Health and behaviour guidance for the first time and in Wales nurtureuk received public support from the Cabinet Secretary for Education for nurture interventions as “integral” to Wales’ approach to mental health and wellbeing in schools.

·       With the London Joint Working Group on Substance Use and Hepatitis C we garnered support from Health Minister Steve Brine MP for a pilot project offering hepatitis C testing in pharmacies. The Minister visited a pharmacy and has spoken positively in Parliament about the potential roll-out of the pilot.

·       With The Hepatitis C Trust, we supported the All-Party Parliamentary Group on Liver Health to produce its ‘Eliminating Hepatitis C in England‘ report, which was subsequently discussed in debates in Westminster Hall and the House of Lords.

Our application particularly focused on our work with Jo’s Cervical Cancer Trust, a UK charity dedicated to supporting women affected by cervical cancer and Let Us Learn, a UK campaign led by young migrants calling for a shorter, more affordable route to settlement.

We supported Jo’s Cervical Cancer Trust to develop clear policy recommendations to remove barriers to cervical cancer screening and increase uptake. Throughout the year we developed and implemented an MP engagement strategy to develop parliamentary champions who would raise these issues with the government through meetings, debates and, on two occasions, at Prime Minister’s Questions. The increased profile on cervical screening led Public Health England to launch its first ever national cervical screening campaign as part of the Be Clear on Cancer campaign.

Kate Sanger, Head of Communications and Public Affairs at Jo Cervical Cancer Trust, commented:  “Principle Consulting has transformed the impact we have with policy makers and the Government.  Their unique approach has helped us to build our skills internally at the same time as increasing our engagement with policy makers and government across the UK.”

In a very different project, we provided support to Let Us Learn (LUL), a passionate grassroots campaign seeking a shorter and more affordable route to settlement for young migrants living in the UK.  We developed and implemented a public affairs strategy to build political support for Let Us Learn’s aims, capitalising on the political window of opportunity presented by the Windrush scandal.

Working closely with LUL, Coram Children’s Legal Centre, Just for Kids Law and the Paul Hamlyn Foundation we identified key messages and ‘asks’ for parliamentarians. From this, we developed a comprehensive campaign strategy, supporting them to target and contact relevant MPs and peers and to develop succinct and engaging briefings ahead of debates and meetings.

Our work led to increased political support for Let Us Learn’s aims and ambitions, securing the signatures of over 60 MPs in a letter to the Home Secretary calling for a shorter, more affordable route to settlement for young migrants. We won the support of the Shadow Home Secretary, who used a set-piece immigration speech to make a commitment to review and reduce immigration application fees for young people.

Let Us Learn’s campaign was recognised in the Home Affairs Select Committee report on ‘The Windrush generation’ in its recommendations to reduce limited leave to remain fees for children and introduce a shorter route to settlement. In another significant win, the Home Office listened to the demands of LUL’s ‘Freeze our Fees’ campaign and announced that it would not raise immigration and nationality fees for the 2019/20 financial year.

By working frequently with the LUL team in their office we successfully developed their capacity to engage with parliamentarians and left a sustainable legacy.

Chrisann Jarrett, Let Us Learn Founder and Project Co-Lead, and Zeno Onokaye-Akaka, Project Worker, said: “Principle Consulting had a large influence on how we approach not just parliamentarians, but our campaign strategies as a whole. We were able to learn about how the government works and use that to our advantage when meeting with MPs and Peers.  Thanks to the meticulous work of Principle Consulting we were able to meet and build relationships with over 20 parliamentarians in only a few months and the list continues to grow.”

Details of our other previous awards can be found here.