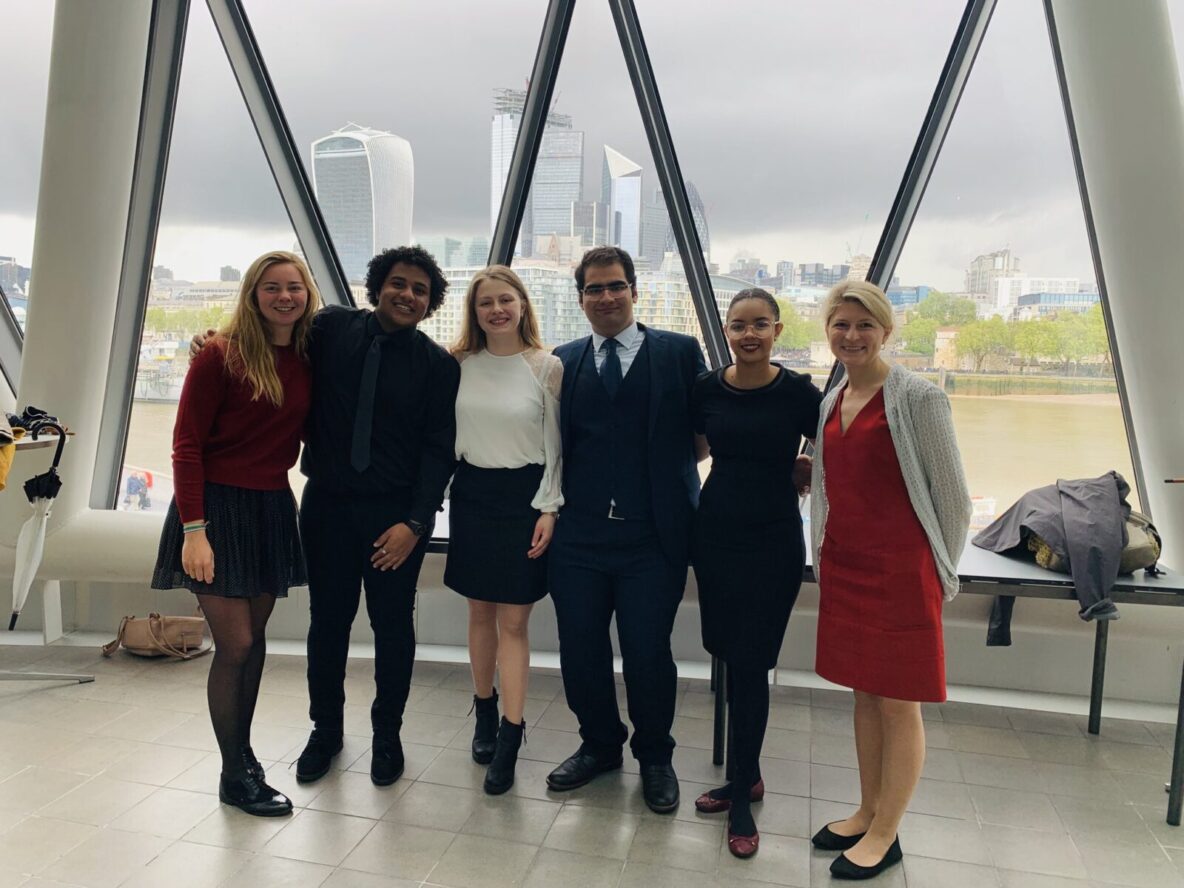 Each year four ESOL (English for Speakers of Other Languages) students from Uxbridge College join us for a few days work experience to learn about the UK political system and how charities campaign for change. Here are some reflections on key political issues for young people today from this years excellent group of students.

My name is Joyce Lima Andrade, I’m 17 years old and I’m from Cape Verde. This opportunity has made me realise that actually I can be good at politics, because politics is not just knowing about what politicians are talking about and the problems they are discussing but understanding what is the meaning of what’s better for all of us and not only for ourselves. The three different days were wonderful, I met amazing people that love what they do helping other organisations achieve their goals and purposes.

I had an opportunity to visit the Houses of Parliament and the GLA. I was very happy because I really wanted to visit the Houses of Parliament because of its history. What impressed me most was the room that has a lot of books that are about politics, with every detail about the discussion of every single session of Parliament. These books are called Hansard – it’s really impressive! At the GLA I was really pleased that they wanted to be transparent with the public so the building is made of big glass windows, so you can see inside. I also learned about things that I didn’t know about and that make me more curious about this amazing world of politics. I enjoyed every moment, thank you Principle Consulting for this opportunity.

I’m very concerned about climate change and it’s a big issue not only in the UK but also in the rest of the world.  It’s what the politicians should be discussing right now. They should find solutions and they should be the first ones to be raising awareness  and changing the laws to save not only the environment but us as well. That’s what a lot of people can’t or don’t want to understand, they don’t want to change their practical lives for something healthy for them and for the environment. They need to know that they can’t be selfish and think only about themselves because they might at some point in their lives have children and their children will have other children who will live in a world that we destroy and we don’t even have the conscience to change and make it better for our next generation. We will die but don’t destroy other people’s lives!

Maybe you are thinking, “how can I help?” Here are some solutions for you:

My name is Kamal Abubaker. I’m 18 years old. I’m originally Eritrean but I was born and raised In Saudi Arabia. I moved to the United Kingdom in October 2017. Moreover, I’m studying ESOL which stands for English for Speaker of Other Languages programme. Recently I started to care about politics, and charities because I feel it’s interesting and I enjoy it.

In my opinion one of the important problems facing the United Kingdom in recent years is knife crime. Knife crime is a cruel crime to rob human life. For what? The answer is nothing. When we have this issue, it is not only about a knife, but links to other problems like drugs. Moreover, most of those involved are adults who should be more responsible about themselves and their future. The problem is the frequency of knife crime rises very frighteningly and we don’t see any improvement which is scary.

I don’t think anyone can be happy in the country with this problem which can affect any one of us everywhere and anytime. However, I hopeful for progress for the best and for humans to live peacefully.

My name is Violeta Bulat, I am 17 years old and I am from the Republic of Moldova. I am student at Uxbridge College, the college which gave me this amazing opportunity to do my work experience with Principle Consulting. My interest in politics was borne from my country, when I started to do voluntary work in a district council. I was very curious to discover interesting things about UK politicians and politics, to work with professional people from an organisation, to find out about different methods of working and the issues that affect Great Britain. Principle Consulting asked my opinion about three important issues and why they matter to me.

Too few opportunities for young people

Young people, in my opinion are the future. They have lots of fantastic ideas, which can help the country, they are interested in helping people and making the world better. They are promoting development, peace, democracy, and values such as tolerance and understanding, including respect for other cultures. From my point of view, the government should give them the opportunity to take part in the voting process to make decisions, to permit them to create councils for young people to meet and help other people and to talk with them, to motivate them to study and to create a better future for everyone. Because young people don’t have these rights, they don’t have the stimulus to study or to tackle the social problems of our community.

The threat level to the United Kingdom from international terrorism is currently ‘Severe’. This means that a terrorist ‘attack is highly likely’. Sometimes I feel scared to go in a public place or to travel by train, when I know that the attacks can happen anywhere and lots of people can be affected. In addition, they’re becoming more common. Everything is being caused by the people who are easily influenced, want to destroy the world and to make people distressed.  Also, they are people who are not informed, or they just want to kill people and themselves as well. Terrorism can be reduced, if people become more interested and serious on this topic.

The influence of social media

Social media can have a negative effect on people who are easy influenced. Most often these people are young people. After seeing pictures with ‘perfect features’, people start to create a negative impression about their body image. They are not thinking that most of the photos are edited and are not real. Also, they can believe in news, which can be fake and after that they make the wrong decisions. Social media creates depression and anxiety in people. They become nervous and lifeless. On social media it’s possible to create fake accounts which can mislead people. Social media is often described as being more addictive than cigarettes and alcohol, with the worst social media apps being Facebook, Instagram and Snapchat when it comes to addiction.

My name is Amir H Davari, I’m eighteen years old, I’m from Iran but I’ve been living in London since 2018 and I’m studying at Uxbridge College. As an Iranian it is hard to not be curious about politics, especially if your favourite subject in middle school was history, so that’s why I’m so curious about politics.

Iranians always talk about politics, it doesn’t matter if you’re are just a child or you are an eighty-year-old.

An issue of importance to me

What is Brexit? Brexit is short for “British exit” – and is the word people use to talk about the United Kingdom’s decision to leave the European Union.

What will be the impact of Brexit?

Most economists have said that being in the EU has a helps the UK trade as a result the UK’s trade would be worse off if it left the EU. Surveys of leading economists show most agree that leaving the EU will reduce income per person in the UK.

How will students be affected?

As a UK student I am concerned that Brexit would limit my opportunities to study, travel and work elsewhere in Europe. Also, what about EU students? Some universities have given guarantees to EU students who enrolled before the UK leaves the EU that Brexit won’t affect their status when it comes to tuition fees. However, these guarantees might not extend to any unforeseeable change in visa regulations. Controlling and limiting immigration has been at the heart of the public debate around leaving the EU. This means that after Brexit, new regulations may be introduced that will require students from the EU to explicitly apply for student visas to enrol at British universities.